Like many other larger and more important institutions, Ruston High School had a humble origin. Prior to 1911, the school was housed in a rambling frame building, included only eight grades, and was located on North Trenton Street in Ruston. Mr. J. G. Ray was the principal of the early school when the first brick building was erected.

Mr. C. V. Reeser and Mr. H. G. Campbell followed Mr. Ray as principals of the school. In 1916, a ninth grade was added to the school's curriculum, and this was the extent to which a student could advance. A student could go directly to La. Tech upon graduation because of the many prep courses offered there.

A new era at RHS began in 1918 with the coming of Mr. H. E. Townsend as principal of the school. Due to his 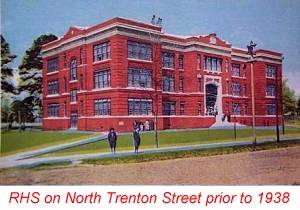 capable and energetic administration, backed by a progressive school board under the leadership of Superintendent H. L. Campbell, Ruston High School became one of the finest schools in our state.

In 1921, the state recognized Ruston High School as a four-year high school. That year twelve students made up its first graduating class. In 1925, the school became an accredited member of the Southern Association of Secondary Schools and Colleges.

Soon the increased enrollment of the school caused this second building to become inadequate, and the school board began planning a new one. In 1937, 13 acres were donated by Mr. T. L. James, along with materials to erect a football stadium. In 1938, a twenty-nine acre plot adjoining this property on the Cooktown Road was purchased from the Holstead estate for $12,000.

The spacious new $940,000 building was one of the first in the nation to incorporate color, and was planned with thirteen color harmonies in the classrooms and foyer. The federal government appropriated 45% of the funds to build the school. The home economics cottage was one of the finest in the United States and was built at a cost of $35,000.

As the student body grew in size and interests, the curriculum, as well as the physical plant, was expanded to meet its increasing needs. The home economics, agriculture, music and physical education departments were enlarged. In the first thirty years of its history, Ruston High School produced four State Championship football teams.

In 1951, the State Department of Education evaluated Ruston High School just as they did many others in the state. A 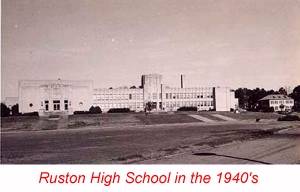 committee composed of school officials from over the state visited the school in April of 1951, and it was most satisfying to the principal and his staff to learn that the committee awarded the school the highest rating and commendations.

Mr. Townsend served as principal of Ruston High School for thirty-four years (1918 - 1952), and in those years, the people of Ruston saw Ruston High School progress from a few spare classrooms in the elementary school to one of the most modern and well-equipped plants in the nation.

In 1952, Mr. R. G. Hanchey was appointed principal of Ruston High upon Mr. Townsend's retirement. For 12 years, Mr. Hanchey gave his untiring effort to improve and maintain the outstanding reputation of RHS. In 1964, Mr. Hanchey resigned his position at RHS, and Mr. James H. Napper was appointed principal. Many improvements were made at RHS under Mr. Napper's excellent supervision.

In 1976, Ruston High School facilities included an auditorium that would seat 1000, band and choir rooms, a public address system, a 4500-seat stadium, tennis courts, and baseball and softball fields. A new wing on the north end of the building was completed in 1968 and consisted of a library, cafeteria, gymnasium, coach's offices and classrooms.

Still another wing was completed on the west side of the building in 1987 connecting the original building with the back of the old Home Ec Cottage. This wing provides even more classrooms to an ever-growing school. Then, on October 8, 1992, Ruston High School was named to the National Registry of Historic Places. This was truly a great honor to have been bestowed upon her tow'ring columns.

Although Ruston High has grown through the years, and continues to do so today, 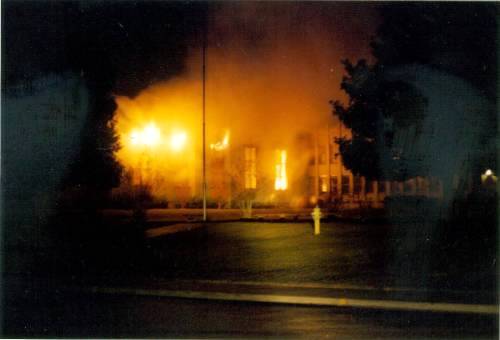 she hasn't been without tragedy. On December 2, 1988, fire struck the old Home Ec building on the RHS campus. The Home Ec building was constructed in the 1940's and served that purpose until 1987 when it was converted to classrooms for Special Education. Damage from the fire was extensive to the downstairs classrooms with damage estimates well over $100,000. Fire struck again during the early morning hours of December 6, 1995. This time, the victim was the school's auditorium. Although the inside of the auditorium was destroyed, damage to the rest of the building was kept to a minimum. Today, both structures have been rebuilt and are back in use. Much of the hardware from the original seating and light fixtures from the auditorium was removed and, although virtually destroyed by the fire, was restored to its original condition.

The real progress of Ruston High School is traced not in her buildings nor in her equipment, but rather in the success of its graduates who have gone on to higher branches of learning, or who are quietly contributing to the good of our community.1

Ruston High School has seen a number of principals at her helm over the years. The students, alumni and staff owe these leaders a tremendous "thank you" for their leadership and support in making RHS the great school that she is today.


I believe in honest work, the courage of strong convictions, and in the inspirations that come from contact with all that is good in books and in people. I will always be loyal to the high standards of Ruston High School and will conduct myself so that my behavior at no time shall bring any shame or reflections upon my school.

I believe it my duty, as a good high school citizen, to extend a warm welcome to all newcomers to our school and to help them become adapted to high school ways, so that they may feel that Ruston High is their school.

I will always respect and honor my teachers, and try to gain from them the inspiration and knowledge which they are so willing to give, in developing the personality and character of the students.

I pledge my allegiance to Ruston High School in all undertakings, and promise to do all that I can to help make her a stronger and more noble school.

Who is a Bearcat?


He is the "bear" in Bearcat. He is storing up knowledge to be used later in college and career. Now he is a "little bear", but some day he will be one of the many shining stars in the "Great Bear Constellation" at RHS.

He is the "ear" in Bearcat. He must make himself into an instrument of hearing so that his ears will always be open to new sounds of Bearcat life: new experiences, new trials and hardships, hard-earned triumph, and true devotion to Ruston High.

He is the "arc" in Bearcat. His is a portion of the circle that makes up Bearcat life. He must keep his position in this circle, for if he gets out of line, the whole circle is marred and incomplete.

He is the "at" in Bearcat. He is at pep rallies, at devotionals, at assemblies, at ballgames, and at club meetings.

Finally, he is the one who strives to be the "cat" in Bearcat with the hope to be one of many students who constitute the strong tackle used to hoist the anchor - the student body - to the cathead of Ruston High School.